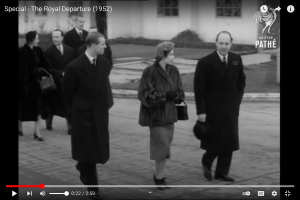 The death of Prince Philip brings to mind some of the occasions his path crossed Whitney Straight’s. One such moment, on 31 January 1952, was captured by Pathé News.

In his capacity as MD of BOAC, Whitney shared Princess Elizabeth and Prince Philip’s last steps on British soil, before they returned a week later to very different roles. He escorted them on to the BOAC Argonaut about to fly them to Kenya. You’ll see him at 00:18, 00:50 and 02:35.

The previous October, fears for the ailing King George VI had led to Whitney visiting the couple at Clarence House. They would shortly depart on a tour of Canada, and he made arrangements for their speedy return should the King’s condition deteriorate: not needed on that occasion, but acted upon to bring them home from Kenya four months later.

Whitney had a great deal of affection and respect for Prince Philip. This is from his diary for 23 May 1972, after an event at the Council for Industrial Design (now the Design Council): ‘Spent all day at a COID do – talked with Prince P who as usual was very good – I admire him enormously – he would make a splendid and benevolent dictator.’