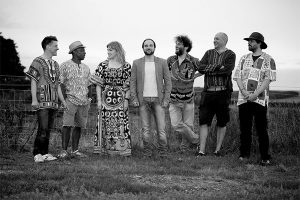 Maybe I shouldn’t have gone. I’ve never seen a tribute act. I’d rather see the original band, play their albums, encounter interesting covers, and avoid precise copies altogether. But a friend had a spare ticket, Graceland is a wonderful album, and I went along to see ‘Gary Stewart’s Graceland’ at Teddington’s Landmark.

Stewart played his own acoustic material through the first set. Pleasant enough, but not enough to have landed him a sell-out at the Landmark. He plugged his merch desk, which is fine, we all have to earn a crust. But I don’t suppose Paul Simon knows he’s helping sell Stewart’s albums.

When the band came out, I tried to ignore the African shirts on the shoulders of white men and focus on the music. They certainly had the staccato lead and bass and the meaty accordion nailed down, and it was good to be reminded what a remarkable collection of songs Graceland is.

But then five of them came forward of their mics for an a capella rendition of ‘Homeless’ – five white people imitating Ladysmith Black Mambazo’s guttural calls. They wisely avoided the Zulu verses and trills, but something else was missing too. We got lots of ‘moonlight sleeping on a midnight bay’, but where was the other English verse, the one that ends ‘many dead, tonight it could be you’? What’s the matter? Too tough a line for Teddington?

And then there was Stewart’s solution to the problem of performing a tribute to only 45 minutes of music. He simply dipped into the rest of Paul Simon’s back catalogue. We got an instrumental ‘El Condor Pasa’, a solo rendition of ‘The Sound of Silence’, and a band version of ‘The Boxer’.

When Simon released Graceland, I had no truck with the criticisms he faced of cultural appropriation and sanction-busting. I thought it was the most wonderful celebration of a musical genre, given a global audience for the first time. In April 1987, I walked by the protesters outside the Royal Albert Hall to witness one of the best gigs I’ve ever been to.

I know I was in a minority on Friday. Teddington lapped up ‘Gary Stewart’s Graceland’. They were dancing in the aisles, literally. But I went home thinking I’d witnessed appropriation of a culture and someone’s work.