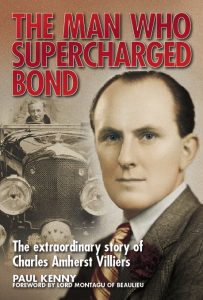 Amherst was born into the British aristocracy, a scion of the houses of Clarendon, Marlborough and Wimbourne. By applying lessons learned in the famous workshops of Oundle School, he came to play a key role in pre-war British motor sport, supercharging the Blower Bentley that did battle with Mercedes at Le Mans, and designing Malcolm Campbell’s first land speed record-breaking Bluebird.

A switch into aeronautic engineering culminated in an audacious design for a six-engine, double decker, transatlantic aircraft, before Amherst moved to the US to devote himself to rocketry, designing the gyroscope that helped win his company contracts for Poseidon and Polaris, and advising on the optimal route for Man to journey to Mars.

This remarkable Renaissance Man was also a gifted artist, studying under portrait painter Pietro Annigoni in Florence, and painting subjects as varied as Pope John Paul II, racing driver Graham Hill and James Bond writer Ian Fleming. Indeed, Fleming was so engaged with his friend that 007’s ‘only personal hobby’ was a Blower Bentley, and Villiers was asked to provide the initial design drawings for Chitty-Chitty-Bang-Bang.

At an age when most men retire, Villiers returned to front-line motor racing, advising on the engine that drove Graham Hill to his first world championship. His revolutionary Grand Prix engine design a decade later was only aborted by Hill’s fatal air accident.

I took each strand of Amherst’s remarkable life, and the character traits that prevented him from attaining true greatness, and weaved them into a narrative I remain very proud of.

Reviewers liked it too…

Octane, June 2010
Brilliantly researched and genuinely entertaining … This is a much overdue account of a life that was rarely dull. Recommended.

Classics Monthly, Christmas 2009
James Page’s Book of the Year
I knew little about Amherst Villiers before starting this book, which turned out to be one of the best I’ve read in a long time … Villiers doesn’t sound like he was the easiest of characters to get along with, or the sharpest of businessmen, and Kenny doesn’t shy away from criticism when it’s warranted. A superb account of one of Britain’s most talented engineers.
James Page, Deputy Editor

The Automobile, December 2009
It is obvious that an enormous amount of research has gone into this book, and Kenny has left no stone unturned in his quest to reveal this intriguing personality. The result is a well-written story, packed with new information.
Jonathon Rishton, Editor

Classic & Sportscar, December 2009
Book of the Month
They say that everyone has a book in them, but few will be as impressive as Kenny’s first effort on engineering legend Charles Amherst Villiers … This is no one-sided eulogy. Kenny explains why Villiers left various projects before they were completed, such as Malcolm Campbell’s first purpose-built Blue Bird. Too often we discover that ‘the rug was pulled away’, as Villiers observed of his own career. A long-overdue record, and Kenny has done his hero justice with his impressive research.
Mick Walsh, Editor in Chief

Classic Cars, December 2009
British culture excels at producing quixotic multi-faceted characters, often eccentric, whose influence is felt through the most diverse endeavours. Charles Amherst Villiers was such a man … Kenny tells his story in a well-paced, matter-of-fact way, taking pains to give the reader context and perspective, while remaining admiring in a very understated way.

Motor Sport, December 2009
This excellent book’s smooth prose adds to the pleasure of learning about the long history of Amherst Villiers, and proves easy reading … Paul Kenny describes all this with expert knowledge, including explanations not only of Villiers’ technical successes but also why some of these failed.
Bill Boddy, MBE, Founder Editor

The Flying Lady, November / December 2009
You couldn’t make up the incredible strands in Villiers’ life and the sheer range of his mental abilities. Kenny has written a really wonderful story, both comprehensive and clear, setting a pace that Villiers’ life demanded. Whilst broadly chronological, chapters on themes in Villiers’ life allow the author to straddle periods. His mastery of the material is total. Most of us would be dazzled by Villiers’ accomplishments, and rightly so. Kenny tries to unravel the psychological complications that prevented Villiers from having the complete success he was capable of and ends with a very fair tribute to a remarkable man.
Tom Clarke