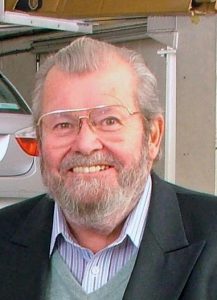 The death of John Haynes OBE, creator of the Haynes Manual, and founder of the publishing group and museum that bear his name, causes me to recall an exchange of letters I had with him in January 2007 which quite literally changed my life.

A couple of years earlier, I’d been twiddling the knobs on one of two microfiche readers in the Churchill College archives, reading correspondence between Sir Winston and a distant cousin of his, Amherst Villiers, whom I was researching for an article Motor Sport had commissioned from me.

Twiddling the knobs of the machine next to me was a man who explained he had concluded that the world needed a book on the correspondence between Churchill and a Liberal MP whose name I never caught. He’d looked up at his bookshelves and seen that a significant proportion of the volumes in his own library had been published by Methuen, and concluded that they were the people to approach with a book proposal. They replied by return with an offer.

‘Well done you,’ I exclaimed, thinking that if ever I were in the same position, I’d approach Haynes. For many years – though now, sadly, no longer – they had permitted their thriving manual business to help fund the publishing of motor racing biographies, and the books on my shelves included a disproportionate number with Haynes imprints.

By the Christmas of 2006, after my Motor Sport article on Amherst had only encouraged me to learn more about him, I’d been engaged in full time research for four months, and I was confident that his cars, planes and rockets, and his close association with Ian Fleming, and the cars driven by James Bond and Caractacus Potts, would make a fascinating biography. I sent John Haynes a synopsis with a one-page covering letter.

The following day, he sent me an even shorter letter: ‘What a splendid way for me to start the new year, as this is one of the most interesting publishing proposals I have seen not only naturally in 2007, but for the last six months of 2006.’

Rest in peace, John – and thank you.