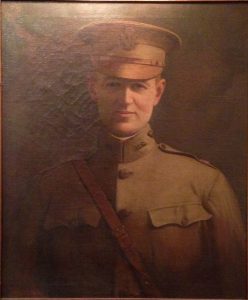 On this special day, I’ve been re-reading some of the research notes I’ve made in Cornell University’s Division of Rare and Manuscript Collections. Among many treasures, it holds the personal correspondence between Whitney Straight’s parents, Willard and Dorothy.

Willard was posted to France in December 1917, as a Major in the Adjutant General’s Reserve Corps. The following October, he was sent to the chateau in Senlis, 55km north of Paris, which served as the headquarters of Marshal Foch, Supreme Allied Commander. Here, Willard reported to Colonel Mott, the liaison officer between Foch and the Commander of the American Expeditionary Force, General Pershing.

On the evening of 10 November, Mott left him at the chateau and drove to Paris with the text of the Armistice. Willard’s task was to advise General Pershing’s HQ when it had been signed, or record any changes to the text and communicate these to Paris. As he sat waiting into the early hours, he resumed the letter to Dorothy he had started a week earlier.

In the last half inch of space, at the bottom of eight pages of tiny, spidery writing commenced a week earlier, he added this: ‘5.40 AM Nov 11th. General Destiches has telephoned that hostilities will cease on Nov. 11 – at 11 A.M. I have telephoned to Col. House. Been sleeping on the floor here in the library. It is Peace – Best Beloved – think what it means!’*

Thus did Major Willard Dickerman Straight of the American Expeditionary Force record the end of World War I, and his part in it.

Three weeks later, he was dead – a victim of pneumonia, brought on by the Spanish Flu.

Walter L Clark’s portrait of Willard hangs in New York’s India House Club, which was founded by Willard in 1914.