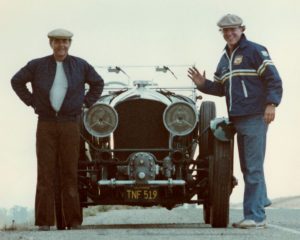 Motor racing has lost a hero and an innovator. The world has lost a gentleman.

The death of Dan Gurney has been announced in typically charming fashion by his wife Evi: ‘With one last smile on his handsome face, Dan drove off into the unknown just before noon, January 14, 2018.’

Dan Gurney took the maiden Grand Prix wins for Porsche and Brabham, and for his own Eagle team, which surely produced the best-looking Formula One cars of the ‘60s. He led Ford to victory over Ferrari at Le Mans, where, legend has it, he became the first driver to celebrate a win by spraying champagne.

He introduced Lotus to the Brickyard, bringing momentum to the rear-engine revolution in Indy racing, and helped McLaren survive the death of its founder Bruce by driving for the team when it returned, numb with grief, to F1.

And his name is immortalised in the ‘Gurney flap’, the lip he added to the trailing edge of a wing to generate downforce and stability with a minimum of drag.

The greatest-ever compliment paid to him as a driver came on the day of his great friend Jim Clark’s funeral, almost 50 years ago now. Clark’s father told him he was the rival his son had respected the most.

And yet, whenever I recall Dan Gurney, I think not about his driving, but about his charm and his beaming smile. The only time I met him was in Birmingham in the late ‘70s, when the streets were shut for a parade of racing cars promoting the Birmingham Superprix, which would finally arrive years later. A long-haired student in donkey jacket, I blagged my way into the bus garage serving as a paddock, and Dan was the first person I bumped into.

He was in racing overalls and stood tall and erect in classic pose, with his foot on the front wheel of his car. All I could say was, ‘Bloody hell, Dan Gurney’. He smiled, said ‘I know’, and engaged me in conversation! I have no recollection whatsoever what we talked about.

Fortunately, I have a much clearer impression, and meticulous notes, of the other time we spoke, 10 years ago this month. I was writing the biography of Amherst Villiers, the man who supercharged the Blower Bentley. Villiers sold his own Blower to Phil Hill, America’s first world champion and, like Dan, a winner at Le Mans. In the summer of 1979, Hill won an historic race in the car at Monterey, and invited Dan to drive it back from Carmel to Santa Monica.

A mutual acquaintance arranged for me to call Dan and talk about the trip. We had some ‘two nations divided by a common language’ moments – I had no idea what a roadster cap was, and I needed ‘duck soup’ translating, but like the car, we soon warmed up, and this is his account of an eventful afternoon.

I showed up with my roadster cap and goggles. I can’t remember if I badgered him or he let me. It was a tremendous thrill to me. I’d heard of the Blower Bentley at Le Mans, and I love old cars like that. My mouth was watering.

At first she seemed to be struggling, like she was starved of fuel. We had a few old wrenches and whatnot with us, so we took apart the carburettor and checked the fuel lines. Eventually we found that some debris had come loose in the fuel tank, so we cleaned the lines and the filter.

After that, she ran like a champ and we truly got under way. She had tall gears and she loped along at 100 without straining at all. I was driving an open roadster with the windshield down, and I could have been in 1930 or ’31. If ever there was a ‘King of the Road’ kind of feeling, it was in that car.

It was easy, effortless, it just cantered along. It was capable of sustaining high speed motoring for a very long time. I knew she could do 130, so it was duck soup to do 100. If you had a gap to the next car which you needed to close, you could gas it at 100 and it would accelerate.

Cruising down the Pacific Coast Road at about 100, we came across a whole flock of Panteras, about 9 or 10 of them. I picked them off one at a time. I’m sure they couldn’t believe such an old car could blow them away.

Well, we started to get hungry so we pulled into a restaurant. Gradually we were joined by the Pantera drivers and we had a talk with them. After about half an hour, the last of them showed up, and he was obviously angry. He’d been given a speeding ticket by the police. They asked him if he’d seen a big old green roadster going way too fast. They’d been trying to follow us for half an hour!

It must be 250 miles from Carmel to Santa Monica. It was a great Time Machine experience.

It remains my favourite passage in the book, the one that readers raise with me most often, and it was made all the more special when Evi sent me the photograph above – two of America’s greatest racing drivers, having fun in their roadster caps with one of Britain’s greatest cars.

Tonight, I doff my own roadster cap to the West, and send my condolences to Evi and the family.