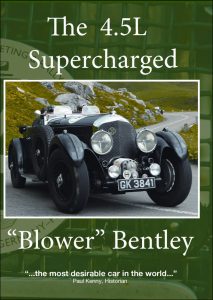 My first overseas talk in support of The Man Who Supercharged Bond came about because of the one of the images on the front cover: the iconic 1962 image which Loomis Dean shot for Life magazine of Ian Fleming sitting in a Blower Bentley, the car supercharged by Amherst Villiers and famously driven by James Bond in the first three 007 novels.

The car, registered GK3841, was owned by the Weibel family in Switzerland, and we became great friends. They invited me to give a talk at the rally they organised to celebrate the eightieth anniversary of the famous Le Mans duel between Birkin’s Blower Bentley and Caracciola’s Mercedes.

I experienced the thrill of being driven at speed in several Blowers, while my iPhone kept pinging in my pocket as it moved between French, German and Swiss carriers. I doubt the cash generated in book sales covered the roaming charges.

The next morning, I sat out next to the Rhine, within sight of Bad-Säckingen’s famous old bridge and was interviewed about the Blower Bentley by Nick Breeze, who was directing the documentary of the rally. I ended up on the documentary poster, and called ‘historian’ – which was nice…