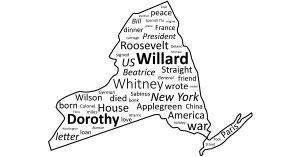 His parents met in Washington, fell in love in Beijing and married in Geneva, and his father survived the Great War but died in Paris, just three weeks after the Armistice, from Spanish Flu. Yet most of Chapter One plays out in New York State…

Whitney Straight was born at home, 22 East 67th Street, near the corner with Madison Avenue, on Wednesday, 6 November 1912 – the day after Woodrow Wilson was elected 28th president. He attended The Lincoln School on Park Avenue and enjoyed weekends at the family’s rural retreat, Applegreen, in Long Island’s Old Westbury.

Through a blissful summer in 1918, he enjoyed the letters and sketches his father sent him from France. He swam and led war games on the beach at Southampton. He visited Theodore Roosevelt on Sagamore Hill and was given three hunting knives. The Roslyn Water Works were even more fun: ‘each engine had 3 oil tanks at each side – and then the man when he wanted to stop it he turned each of these little oil taps around – and then turned two little taps off – and then he put the clutch off – and then he went to the boiler room and put the break back and forth – and then the engine stopped – and after that he turned a little wheel!’

But then, that December, he was sat down with the letter his father had written a year earlier, addressed to ‘Master Whitney Straight, if anything happens to me.’

Excerpts from that letter are carved over the fireplace in the Memorial Room of Cornell University’s Willard Straight Hall. Chapters Two to Nineteen follow the six-year-old American boy who read it to the English gentleman he became, and the extent to which he followed his father’s advice.